Malaga is a popular holiday destination - known as the birthplace of Picasso and for sweet Malaga dessert wines from vineyards outside of town. Points of interest include impressive Gothic architecture, remains of a Moorish castle and interesting museums. Malaga is a popular starting point for trips to Granada and resorts along Costa del Sol. Splendid Granada and famed Alhambra are the region’s most outstanding attractions. Magnificent Moorish palaces and fortifications contrast sharply with Christian churches from Spain’s 1492 Reconquest era. Ronda's incredible location affording spectacular views over the valley and distant hills. Malaga Fine Arts Museum holds works by Spanish artists of the 16th to 20th centuries and by artists from Malaga, including Picasso. Marbella, which has been favored by the rich and famous, is a very popular holiday and yachting resort destination. One of the first resorts of the Costa del Sol, Torremolinos has luxury hotels, busy plazas and shopping streets, a lively art scene, a Wax Museum created by Madame Tussaud, and a glitzy casino.

Today Spain's major commercial port and naval base, Cartagena lies on the coast of Murcia, its great indented bay guarded by rocky promontories, each topped by a fort. The city contains the remains of old walls, a castle constructed probably in Carthaginian times, and a church that was formerly a 13th-century cathedral. Attractive promenades extend along the harbour, while to the northeast is the famous beach and watersports resort area of the lagoon-like Mar Menor.

Ibiza, often called the White Island for its typical architecture, became a major center of touristical attraction during the 1960s, being then famous for its "Hippie-Culture" and nudist beaches. Today Ibiza has offerings for families and older visitors, but there are the young ones who are attracted by the island's rollicking nightlife, which already starts in the afternoon, at the beaches and in the center of town, to continue until dawn in the numerous discotheques. Behind the beaches and in the island's interior, is a pure and simple Mediterranean culture, and remains of populations which inhabited Ibiza thousands of years ago, as for instance the famous wall-paintings of Ses Fontelles.

Mahon is a town known since antiquity for its natural harbor. Its coastline includes beautiful natural coves, rocky cliffs, and long beaches. Menorca is an open-air museum with archaeological remains giving evidence of Mediterranean cultures of thousands of years ago. Traces of English rule remain, especially in the design of tall houses with sash windows overlooking the harbor. Watersports are most popular of the wide range of leisure activities available. Sail boat rentals are available at numerous beaches and a golf course is located in Son Park. Menorca was declared a Biosphere Reserve by UNESCO in 1993 - an acknowledgement of the island's environmental importance and artistic and cultural heritage. Santa Maria Church, located in Plaza de la Constitucion, was founded in 1287 and rebuilt in neo-classical style in the 18th century. Its 19th-century organ is one of the world’s largest, with 3,004 pipes. Sa Mesquida and Cala del Pilar are the two best beaches.

As Sardinia's capital, Cagliari is both a thriving modern city and a fine example of the varied history of this Italian island. Explore the Roman amphitheater, Spanish townhouses, and Pisan watchtowers. Antiquities from the native Nuraghi culture and from the Phoenician era onward are well-displayed in the National Archaeological Museum.

Trapani was founded in antiquity on Sicily's western coast by the Sicanians. Trapani is an unusual Sicilian city for its westward position, which affords spectacular views of some of the Mediterranean's most beautiful sunsets. The oldest parts of the city have been modernized in many respects, but Trapani shows its medieval past. The Annunciation Sanctuary was built in the fourteenth century in Romanesque Gothic style and still retains splendid medieval elements such as the facade's portal and rose window, though the church's interior has been modified. The Pepoli Regional Museum is renowned for its medieval and modern collections, including articles from the Bourbon era, though it also houses ancient finds. Giudecca Palace is a Catalan Gothic structure built in the sixteenth century. The Church of Saint Mary of Jesus has a splendid Renaissance Gothic facade. The Church of Sant'Agostino is Romanesque Gothic with a beautiful rose window. The Cathedral and Collegio Church were built in Baroque style during the seventeenth century.

Valletta is the capital of Malta. This remarkable fortified city with its massive bastions followed the most advanced Renaissance ideas in town planning, with streets laid straight on a grid looking over the Grand Harbour. Outside the 'City Gate' is the famous Triton Fountain. 'City Gate' has public buses and vendors selling soft drinks and all sorts of traditional fresh Maltese bread and sweets. Freedom Square shows an extraordinary capital with buildings of fine architecture of different tastes and styles ranging from the Mannerism to Baroque to Rococo to Neoclassicism. Valletta is a fascinating city for wandering around looking at what used to be the Knight's own cathedrals and Auberges. The city's backbone is Republic Street, which runs straight through the city center to Fort St. Elmo. Valletta has several narrow, steep side streets decorated with traditional Maltese pastel colored balconies and a statue on almost every street corner. There are plenty of shops, cafes, and restaurants to choose from.

It is known for its beautiful beaches and crystal clear waters of the Ionian Sea. It has a small, but prosperous fishing port. There are many hotels and restaurants and the town is ten minutes away from another of Sicily's most important tourist destinations Taormina.

Itea, in the Gulf of Corinth, is the port from which you can visit Delphi and the monastery at Osios Loukas. Docking at the pier close to the centre of town, a twenty minute bus or taxi journey takes you to Delphi, perhaps the most magical classical site in Greece.

Sail between steep rock walls, with mere feet to spare, to save sailing around the Peloponnese.

Piraeus is the seaport for Athens, the capital of western civilization, which boasts a fantastic mix of classical ruins and vivacious modern life. Climb the hill of Acropolis to wonder at the Parthenon, join the lively Athenians in Constitution Square, and find a welcoming taverna for spirited bizouki music, plenty of ouzo to drink, and energetic Greek dancing. Piraeus is the largest harbor in the country. The white chapel of St. George at its summit has a theater bearing the same name. The hill of Nymphs is the site of a planetarium, which is located above magnificent Thesseio temple. Among all of these hills, Acropolis is the one that glorified Athens and the whole Greek world and became the symbol of the western civilization. Bays and small rocky or sandy coves dot the area and during the summer are filled with Athenians and foreigners enjoying their beauty.

Athens at a Glance - 3 hours

Athens - The Athenian Riviera & the Temple of Poseidon - 4 hours 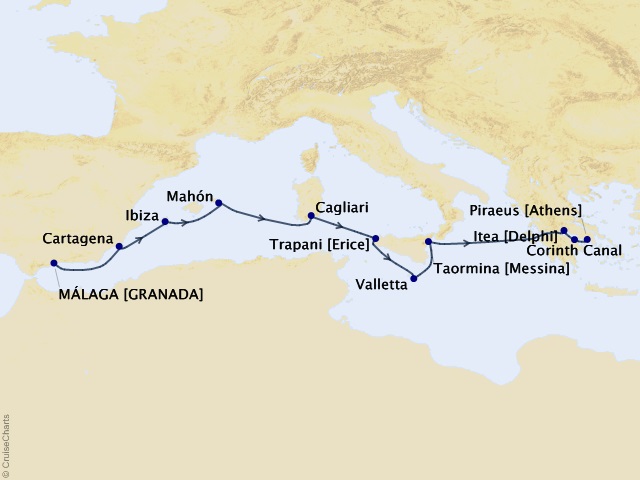 Fares are per person, based on double occupancy. Government, port, document issuance, handling & service fees, transfers and airfare (unless otherwise stated) are additional for all guests.

All prices per person and in USD unless otherwise stated.
Offer ID:
1355188