Choose ONE of the options below.

Castries is the capital of St Lucia, an independent Windward Island in the southeastern Caribbean Sea. What Castries may lack in sophistication it more than compensates for in its colourful Creole mood. Wander amid the lively street market with its fresh fruit, pottery and baskets. Then explore this most scenic of Caribbean islands, whose green mountains are draped in lush vegetation, and whose landmarks include the twin peaks of the Pitons rising sheer from the sea, the steaming sulphur springs of the 'drive-in' La Soufriere volcano and its unspoiled golden beaches. Further sights are to be seen at Diamond Falls and Mineral Baths where visitors can walk the gardens and take a dip in the pool under the waterfalls.

See the whole panoply of tropic splendor, lagoons, white sand, coral reefs and the island of Bequia and the stunning approach to St. Vincent and its rugged grandeur.

Deshaies is a beautiful island commune in the French region of Lesser Antilles. The beaches are are very popular here and excellent for swimming. The Botanical park is also a highlight of the island. Additionally, residents keep up a small handcraft industry, and wooden souvenirs can be purchased in shops.

The skyline of St. John's, the capital and largest city of Antigua and Barbuda, is dominated by the magnificently evocative white baroque towers of St. John's Cathedral. Built in 1845, the church is now in its third incarnation, as earthquakes in 1683 and in 1745 destroyed the previous structures. The towers are the first sight of Antigua for about half of the island's visitors each year, many of whom arrive by boat. St. John's is a lively hub for shopping and dining.

There was never any hope of lucrative sugar plantations in St.Barths. It was too dry, too steep, too rocky, and, finally, too small. Unsuitable for agriculture, the island was never coveted as a prize during the colonial wars of the 18th century. The place had a serviceable harbor, and this allowed the town that grew around it, Gustavia, to play a key role in that intermittent conflict, a role that was to presage much of its future. Overflowing warehouses surrounded a harbor packed with ships from many nations, and a mercantile and architectural tradition was established that has lingered to the present day. Today, Gustavia has adjusted itself to satisfy the increasing number of visiting tourists. Restaurants, boutiques, and gift shops now line streets once busy with merchants, merchant seamen, and adventurers.

There are many ways to hunt for treasure in St. Thomas. You can discover its historic wealth in such places as the birthplace of painter Camille Pissarro or the infamous Bluebeard's Tower. Its sporting riches are tennis, golf, sailing and incredible beaches. Beneath its crystal-clear waters, you'll find coral gardens and shimmering schools of jewel-colored fish. Its fortune of earthly treasures can be found in the many shops of Charlotte Amalie, where savings on jewels, crystal, perfume and fine wines will arouse your hunting instincts.

San Juan, Puerto Rico, is an old city of cobblestone streets, colonial architecture and shaded courtyards. It reflects its Spanish past in such famous fortresses as El Morro and San Cristobal. San Juan is also a modern world capital -- a cosmopolitan metropolis of wide boulevards, lively cafes and highly regarded shops and galleries. San Juan is two unique destinations -- and you'll be fascinated by them both.

Originally a fort built by the U.S. Army in 1838, during the Second Seminole War, Ft. Lauderdale has little left of its warlike past. Instead the city welcomes visitors with broad beaches and an easy pace of life, plus convenient air and water connections that make the city a perfect place to visit. 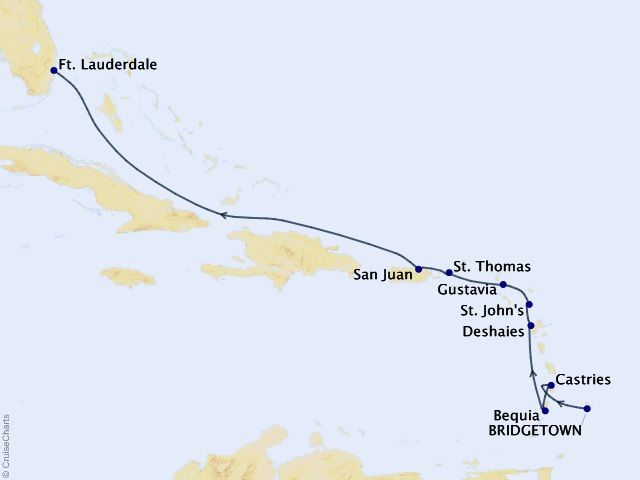 Departure Date:
3/6/2023
Number of Nights
10
Cruise Inclusions:
Remarks:
Cruise Only Fares are in US dollars, per person, based on double occupancy.

All prices per person and in USD unless otherwise stated.
Offer ID:
1404861