Choose ONE of the options below.

*Promotion is subject to availability, may not be combinable with certain fares or other amenity offers, is capacity controlled and may be withdrawn at any time. Other restrictions apply.

With a great historic past and incomparable art treasures, Venice is renowned as one of the world’s great cities. Its 118 islands are separated by more than 150 canals and spanned by 400 bridges. During Venice's artistic golden age many magnificent structures were erected to create world-famous masterpieces. One of the best sightseeing routes is along Grand Canal, with many palaces lining the famous waterway. St. Mark’s Square offers access to some of Venice’s most famed attractions - St. Mark’s Basilica and Doge’s Palace. From Piazza San Marco, a maze of narrow streets are lined with shops, cafés and restaurants. A popular pastime is sitting at an outdoor café facing the square while people-watching and letting the whole marvelous scenario unfold. Venice’s Murano, Burano and Torcello Islands comprise an area famous as home of Venice’s glass-blowing industry and known for their charm, skilled lace-making and medieval monuments. Relax on a gondola ride, see art treasures in museums, churches and palaces, and have a sumptuous meal - all in this incomparable city.

Luxury Cruise in The Lagoon with Lunch

The Secret Corners of Venice

Classed as a world heritage treasure by UNESCO, Dubrovnik is a place of ancient streets lined with stone palaces, Venetian-style buildings and bell towers. The city is enclosed by stone walls, and the highlight is a leisurely walk atop these massive walls for a great view of the city and the sea. Entering Dubrovnik, you are greeted by an impressive pedestrian promenade, the Placa, which extends before you all the way to the clock tower at the other end of town. The Orlando Tower here is a favorite meeting place. Just inside the city walls near the Pile Gate is the Franciscan Monastery housing the third-oldest functioning pharmacy in Europe, operating since 1391. For a fantastic panorama of the city, take a cable car ride to the summit of the 1,340-foot Mount Srdj.

Buggy tour and sightseing of Dubrovnik

Bari (ancient Barium) is an industrial city in the Apulia region of southern Italy and a seaport on the Adriatic Sea. The old quarter of the city sits on a promontory separating the old and new harbors. It is the site of two notable Romanesque churches: the Basilica of San Nicola (11th-12th century) and the cathedral (late 12th century). Bari was formerly a Greek colony and later a Roman trading settlement. It came under the domination of the Lombards, the Byzantines, and the Normans. It was a key Italian naval base during World War II and sustained heavy damage. From here it is easy to visit Alberobello and Egnazia.

Take a step back in time and visit the old town of Kotor, one of the best-preserved medieval towns in this part of the Mediterranean. The asymmetric structure of the narrow streets and squares, combined with the awesome monuments of medieval architecture, contributed to Kotor being placed on UNESCO’s “World’s natural and cultural inheritance” list. From ancient fortification systems surrounding the city to 12th century cathedrals, Kotor is a dream come true for those who revel in history. Entrance to town from the Gurdic spring, consists of 3 separate gates, built from the 13th, 16th and 18th centuries. The Cathedral of St. Tryphon is one of the most visited and impressive churches in the city. According to some texts, the original church was erected in the 8th century and rebuilt in 1166. Two earthquakes, one in 1667 and one in 1979 seriously damaged the cathedral and it continues to be restored to this day. The city is breathtaking in every respect and only a visit will truly reveal all it has to offer.

Corfu's unique scenery, with gentle green hills and luxuriant southern flora, makes it one of the most beautiful of all Greek islands. Many beautiful buildings can be seen in Corfu Town. Corfu is a popular holiday destination for vacationers from all walks of life who come to enjoy mild climate, calm blue-green water, rugged mountains, hidden coves and miles of sandy beaches. A number of historical sights range from old fortresses and mansions to cathedrals and palaces. Corfu Town is surrounded by arcaded Venetian buildings. The Spianada is considered to be the largest square in Greece. Explore the narrow streets of Old Town. See Town Hall and the 300-year-old Church of Saint Spyrídon; a silver sarcophagus contains the remains of the town's patron saint. The Royal Palace - a neo-classical mansion - holds on its upper floor the Museum of Byzantine and East Asian Art. The Archaeological Museum has displays of artifacts discovered on Corfu. The Old Fortress, an impressive 14th-century Venetian structure, is now used as a popular venue for concerts.

Katakolon is a port admired for beautiful beaches. Equally important, Katakolon is the gateway to Olympia, the great Panhellenic sanctuary. The site of ancient Olympia is situated at the foot of wooded Mount Kronos in an area of gentle hills; excavations began in 1875 and are considered one of archaeology’s great achievements. A direct consequence was the revival of Olympic Games by Baron Pierre de Coubertin; the first modern games were held in Athens in 1896. Today, visitors to Olympia are overwhelmed by the impact of ancient remains and their significance. The site’s most important excavations include numerous monuments, such as Temple of Zeus in the Sacred Precinct, Treasuries, and Stadium. There is an excellent Archaeological Museum with a large collection of bronzes, pottery and sculptures unearthed during the excavations. The main reason for a visit to Katakolon is the trip to Olympia. Those guests who wish to remain in Katakolon will enjoy its unhurried atmosphere and the friendliness of the people.

Soudha Bay (Chania) is located in the western region of the island of Crete, Greece.  Chania (located only 7km from the bay) is the second largest city in the island, which makes it the perfect place to spend your day. This destination, offers its visitors an array of attractions including the respected Soudha Bay War Cemetery, wonderful beaches and plenty of shopping opportunities.

Santorini is everything that has made the Greek islands legendary. The world famous island of Santorini is the southern most island of the Cycladic group in the Aegean Sea, and is located north of Crete. Its population is distributed among thirteen villages and just exceeds nine thousand. The marvelous dry climate and unbroken sunshine create year around conditions which are perfect for observation, photographs and videos under an extraordinary variety of natural lights and colors.

Piraeus is the seaport for Athens, the capital of western civilization, which boasts a fantastic mix of classical ruins and vivacious modern life. Climb the hill of Acropolis to wonder at the Parthenon, join the lively Athenians in Constitution Square, and find a welcoming taverna for spirited bizouki music, plenty of ouzo to drink, and energetic Greek dancing. Piraeus is the largest harbor in the country. The white chapel of St. George at its summit has a theater bearing the same name. The hill of Nymphs is the site of a planetarium, which is located above magnificent Thesseio temple. Among all of these hills, Acropolis is the one that glorified Athens and the whole Greek world and became the symbol of the western civilization. Bays and small rocky or sandy coves dot the area and during the summer are filled with Athenians and foreigners enjoying their beauty. 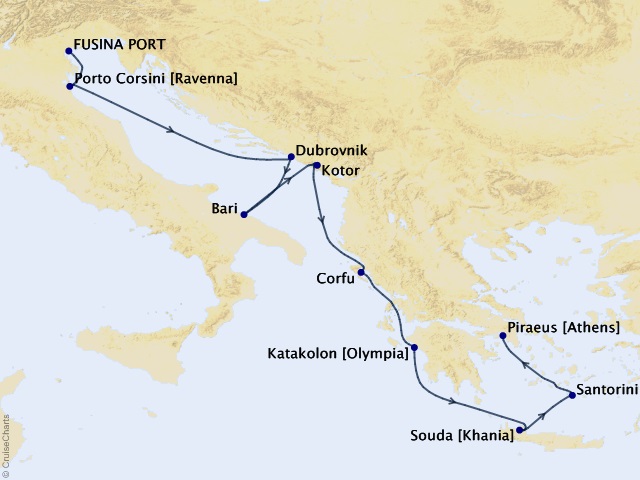 Cruise Only Fares are in US dollars, per person, based on double occupancy.

All prices per person and in USD unless otherwise stated.
Offer ID:
1436547